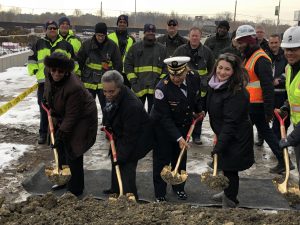 Pullman neighborhood. Building on the city’s continued efforts to provide the latest

tools, technology, and training for first responders, the new facility will be the

second-largest fire station in the city, housing a CFD District Office, an Office of

“From running into burning buildings to coming to our rescue in a time of need,

public safety infrastructure, but also an investment to stimulate growth and new

jobs for our south side communities.”

pantry and dining area and a laundry room, the 27,000-square-foot, single-story fire

and eight officers. Additionally, the facility will also feature a state-of-the-art

house will reap the benefits of a world-class facility”, said Fire Commissioner

Department to more efficiently serve the residents, business owners, and visitors of

the South and South East sides of Chicago.”

Managed by the PBC, the design and construction of the project will be led by the minority-led firm, UJAMAA/Trice Joint Venture. The $30 million project is expected to support 94 full-time jobs, at least half of which are required to be filled by local Chicago residents as part of the City’s ongoing effort to build career opportunities for community members of a project’s surrounding neighborhood areas, both in the construction trades as well as skilled and unskilled workers.

“This state-of-the-art fire station will not only represent a community anchor for West Pullman residents, it will ensure Chicago’s firefighters are better equipped to serve those who live and work in this neighborhood,” said Alderman Carrie Austin. “I look forward to cutting this ribbon and making this vision for our community a reality.”

“This modernly designed space will embody the ‘spirit of service’ of each man and woman who serves as a firefighter or first responder and provide them with the necessary facility to fulfill their mission to promote fire safety, provide emergency care and extinguish fires,” said Carina E. Sanchez, Executive Director of the Public Building Commission.

Anticipated to be open by summer 2020, the new fire station will be built on vacant land located at 119th Street and Morgan Street, replacing the existing Engine Company 115 located at 11940 South Peoria Street.