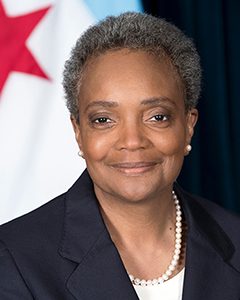 On May 20, 2019, Lori E. Lightfoot became the 56th Mayor of the City of Chicago. Her campaign’s call for an ethical and responsive government and opportunities for all Chicagoans resonated in every ward of the city.

Mayor Lightfoot carries the watchwords of her campaign into office:

Mayor Lightfoot came to City Hall following a career as a manager, advocate, and reform expert, with extensive experience working at the city and federal level to make government more accountable and accessible. Before taking office, she served as a senior equity partner in the Litigation and Conflict Resolution Group at Mayer Brown LLP. While at Mayer Brown, Mayor Lightfoot took on two critical tasks for the City of Chicago, chairing the Police Accountability Task Force, and serving as president of the Chicago Police Board.

Mayor Lightfoot held other key positions in City government, as the Interim First Deputy of the Chicago Department of Procurement Services and Chief of Staff and General Counsel of the Chicago Office of Emergency Management and Communications.

Mayor Lightfoot is the youngest of four children born to Elijah and Ann Lightfoot in Massillon, Ohio. With the exception of a one-year clerkship on the Michigan Supreme Court in Detroit, Mayor Lightfoot has lived in Chicago since 1986. She and her spouse, Amy Eshleman, live on the near northwest side with their daughter, Vivian.