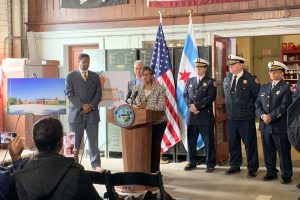 Mayor Rahm Emanuel today joined Alderman Austin to announce the development of a new state-of-the-art facility for the Engine Company 115 fire station in Chicago’s West Pullman neighborhood as part of the city’s continued efforts to provide the latest tools, technology, and training for first responders. The new facility will be the second-largest fire station in the city, housing a Chicago Fire Department (CFD) District Office, an Office of Emergency Management and Communications (OEMC) radio communication tower and three ambulances.

“The men and women of the Chicago Fire Department embody the duty, dedication, and selflessness that earn them the name ‘Chicago’s Bravest,’” said Mayor Emanuel. “Today’s investment in West Pullman will give our first responders the technology, tools, and space needed to keep our communities safe.”

“I am pleased with the future addition of this ‘super’ firehouse, one of the largest neighborhood firehouse ever built in the city of Chicago”, said Fire Commissioner Richard C. Ford II. “This brand new firehouse will contain three ambulances and a state-of-the-art radio tower that will enhance communications for the South and South East sides of the city.”

The City plans to build the fire station on vacant land located at 119th Street and Morgan Street, replacing the existing Engine Company 115 located at 11940 South Peoria Street.  Development of the estimated $30 million project will be managed by the Public Building Commission of Chicago and the anticipated opening is summer 2020.

“Ongoing public safety investments like this state-of-the-art facility would not be possible without the commitment and sacrifice from our local first responders who work to keep our community safe every day,” said Alderman Carrie Austin. “The new Engine 115 firehouse will create the extra space and state-of-the-art training facilities necessary for our firefighters and EMTs. I look forward to getting the work done and cutting the ribbon.”

This is the latest effort as part of the Mayor Emanuel’s public safety strategy to invest in local neighborhoods by ensuring Chicago’s first responders have the facility space and state-of-the-art tools needed to keep the city’s residents safe.