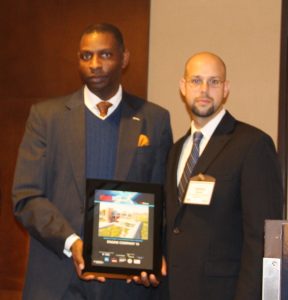 The award marks the second such honor for Engine Company 16 this year. The project previously won the Friends of the Chicago River 2013 Silver Ribbon award.

The ENR Midwest’s Best Projects 2013 awards showcase the Midwest’s best construction projects and honor the agencies and companies that built them, recognizing outstanding design and construction. Engine Company 16 won in the government and public buildings category.

The building is the first LEED-Platinum firehouse in the State of Illinois with numerous and impactful sustainable features. Its design will serve as a prototype for future fire stations, an approach that promotes faster project delivery and a more favorable cost structure.

“This award shows once again that good design and construction are a winning combination and the key to functional and sustainable buildings,” said Erin Lavin Cabonargi, Executive Director of the PBC. “We are proud of all of the projects we manage and it is good to know that our commitment to excellence is recognized by our industry peers. We are pleased to be named as a winner, alongside some of the Midwest’s premiere construction projects.”

Design and construction of the new firehouse was managed by the Public Building Commission of Chicago on behalf of the Chicago Fire Department and the City Department of Fleet and Facility Management.

Engine Company 16, located at 53 E. Pershing Road in the city’s Bronzeville neighborhood, opened in 2012. It marked a new design for a firehouse, allowing the Chicago Fire Department (CFD) to consolidate services into a single building. The building houses Engine Company 16, the South Side ambulance administrative offices and the CFD Hazardous Materials response officers and administrative section.  The consolidation allowed for greater coordination within CFD and lower operating costs.

The 26,063-square-foot firehouse provides an upgraded facility to house modern firefighting apparatus, including an apparatus bay that provides the ingress and egress necessary to safely maneuver modern equipment, which ultimately improves response time and reset for subsequent responses. A total of five emergency response vehicles are housed in the firehouse, compared to the old Engine Company 16, which could only hold two vehicles in a very tight configuration.

About PBC:
The Public Building Commission of Chicago manages construction and renovation projects for the City of Chicago and its sister agencies. Mayor Rahm Emanuel serves as the PBC’s chairman. Erin Lavin Cabonargi serves as the Executive Director of the PBC.  Additional information about the PBC and its projects can be found at www.pbcchicago.com.  You can also follow the Public Building Commission of Chicago on Twitter: @PBCChi and on Facebook: https://www.facebook.com/PBCChi

where to buy viagra http://viagraforsaleuk1.com viagra problems side effects