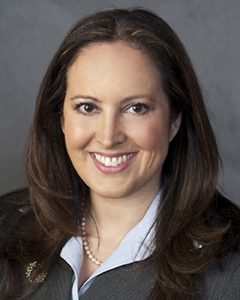 Commissioner Mariyana Spyropoulos was elected in 2010 and re-elected in 2016. She was elected as Chairman of Finance in January 2013 and Board President in January 2015 and 2017. Commissioner Spyropoulos serves as Chairman of three committees: Judiciary; Labor and Industrial Relations; and Pension, Human Resources and Civil Service. She is also Vice Chairman of the Federal Legislation and Finance Committees and serves as a Trustee of the Retirement Fund.

In January 2011, the Board of Commissioners appointed her to the Public Building Commission.  Commissioner Spyropoulos has championed transparency and fiscal responsibility to the taxpayers of Cook County. She has been a strong supporter of labor and veteran initiatives at the District. She has prioritized community outreach and engagement by speaking to community groups throughout the County about water and environmental issues.

In 2017, she received the Illinois Water Environment Association Public Official Award. Commissioner Spyropoulos is an attorney with her own practice. Prior to opening her own law office, Commissioner Spyropoulos worked as an Assistant Cook County State’s Attorney. Before law school, she lived in London, England, where she worked at Nomura Research Institute. Her work focused on privatization efforts in Eastern European countries. Commissioner Spyropoulos received her law degree from The John Marshall Law School and her MBA from Loyola University Chicago. She also completed graduate work in American government at Georgetown University, Washington, D.C.